June 30, 2017
It was two weeks after the first Ontario Cup and we were down at the second O-Cup which was being held at 20 minutes north of Kingston. It had been raining a lot the week prior to the event and there was a lot of flooding all over Ontario. The race promoter Dan Marshall of Substance Projects was working non stop to keep the course in decent shape with a record number of rain falling days prior. I had come down with a cold and I wasn't able to race which was very unfortunate as I always have enjoyed racing at this venue. Even though I couldn't race I still drove for 3 hours to help out the promoter and cheer on my team mates who were racing. Once we arrived the trail was very muddy and it was raining. As the day went on the rain stopped and the mud turned very sticky instead of being a slippery mud earlier. So everyones bikes were becoming very stuck up and there were multiple spots on the trail that racers had to run. I was able to watch as the racers took off and how they performed through out the race wich was exciting for me since I am usually racing and I can't see what else is going on. It was deffinetly a good day of racing and also a very tough day battling the mud so big congrats to everyone who participated. I was very proud of my team mate Thomas Hulton who placed 2nd in the Junior Expert division and Scott Leonard who was just off the podium in 4th place.
Even though I didn't race I had a fantastic day at the event and Dan Marshall did a great job even though the weather was not great. I hope they do another Ontario Cup there in the future and if they do I will definitely be looking forward to it. 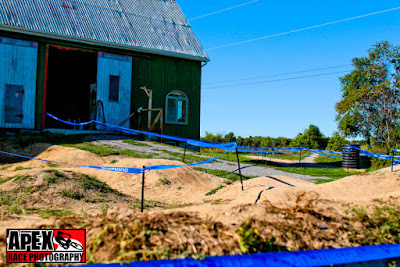 Popular posts from this blog

For this blog post I am doing a comparison on two mountain bike forks designed and manufactured by Lauf Forks. I am going be reviewing the TR Boost and Trail Racer, they are both great forks and I am going to discuss what the pros and cons are.

The first thing that I noticed when I started to ride the TR Boost is that it is one of the stiffest forks that I have ever ridden. Compared to the Trail Racer the Boost fork has better responsiveness in corners and responds to what you want to do immediately. The Trail Racer isn't as stiff laterally as the TR Boost is and you will notice that when you are cornering hard there might be a bit of flex in the Trail Racer compared to none with the TR Boost. The 60mm of travel is the same for both forks so you wont notice any difference with your suspension.

Compared to the Lauf Trail Racer which uses a standard 100mm thru axle the Lauf Boost uses a 110mm thru axle. When I received the TR Boost fork I didn&…
Post a Comment
Read more

March 10, 2019
This winter has been a long one and I can't wait for the snow to start melting. With still lots of snow and only 5 weeks until the first race of the year I know it is going to be a crazy spring.

My training over the past 2 months has been good and I am feeling ready to get out and ride especially as I have completed my race schedule. I have made a big leap in the marathon seen as I am going to take on the 24 hour Summer Solstice this year as a Solo competitor. This event will be the biggest and longest race I have ever been apart of so it is a very big deal for me and I am super excited for it.

The rest of this years schedule is very exciting as seen below.